Installation of Jean Tinguely’s light sculptures by the restoration team of Museum Tinguely, 2019

They squeak, they rattle, they turn. In keeping with the artist Jean Tinguely’s motto “The only stable thing is movement – everywhere and always,” the Julius Baer Art Collection lent four of the artist’s works to the Atelier Bar in Zurich. Let his former assistant and the restorer of Museum Tinguely bring the humorous story to life.

Jean Tinguely (1925–1991) grew up in Basle, Switzerland, and is most prominently known for his kinetic artworks. If you ask art historians, Jean Tinguely was a pioneering figure in the art of the second half of the twentieth century. If you ask Jean-Marc Gaillard, the restorer of Museum Tinguely, he was a “mad dog.” Furthermore, his former assistant Seppi Imhof describes him as “…a bon vivant. He enjoyed his life and had beautiful women, cars and houses, not to mention a bit of money. And that’s more or less everything you need, isn’t it?” 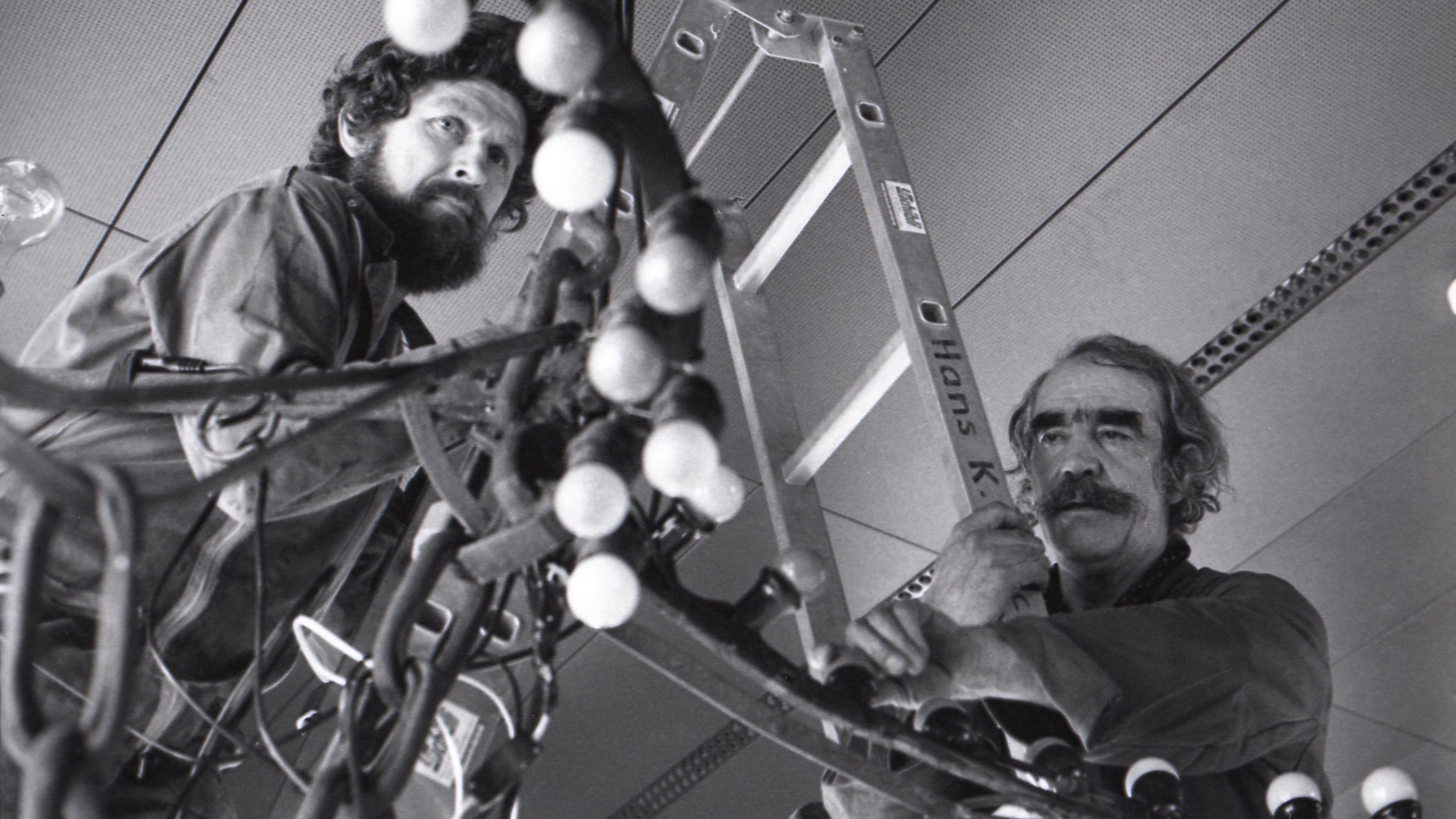 At the centre of Jean Tinguely’s oeuvre stands the machine and its inherent poetry. “I was barely 23 when I arrived at Tinguely’s studio,” explains Jean-Marc Gaillard, one of two restorers at the Museum Tinguely in Basle. “It was an incredible time, I soaked it all up. Over the past 17 years, during which I have worked at the museum, I see just how much meat is on this bone. I realise over and over again how multifaceted this man was. Building machines in 1953, just eight years after the war, that don’t produce anything at all, that’s mind-blowing.”

The best stories are written by life itself
The history of Julius Baer and Jean Tinguely dates back to 1981, when Zurich’s airport police approached Peter J. Baer, member of the Bank’s founding family and of the Board of Directors, to ask whether he was willing to give a gentleman a lift. Tinguely urgently needed to get to Basle, and Peter J. Baer had a pilot licence, flew his own plane and accepted the unannounced passenger. The encounter marked the beginning of a friendship.

A few weeks passed and Peter J. Baer received an illustrated thank you note from the artist. When the hobby pilot was assigned to develop a concept for the interior design of the ‘Cafeteria zur Münz’ (a café located directly besides Julius Baer’s headquarters in Zurich), he approached his friend Jean Tinguely for help. “Jean was probably more than happy to do it – but on his own, chaotic terms,” says Jean-Marc Gaillard with a laugh. Accordingly, the artist received a ‘carte blanche’: neither the design nor the delivery date were set out in writing.

Eleven lamps and pitch-black walls – welcome to the ‘Cafeteria zur Münz’
The outcome of this unconventional commission were eleven lamps with rotating elements, feathers and colourful lights that shone on the pitch-black walls of the cafeteria. “We produced them there and then,” explains Seppi Imhof. “The special thing about the lamps is their playfulness. They are happy objects. Every time you look up, you discover something new.” 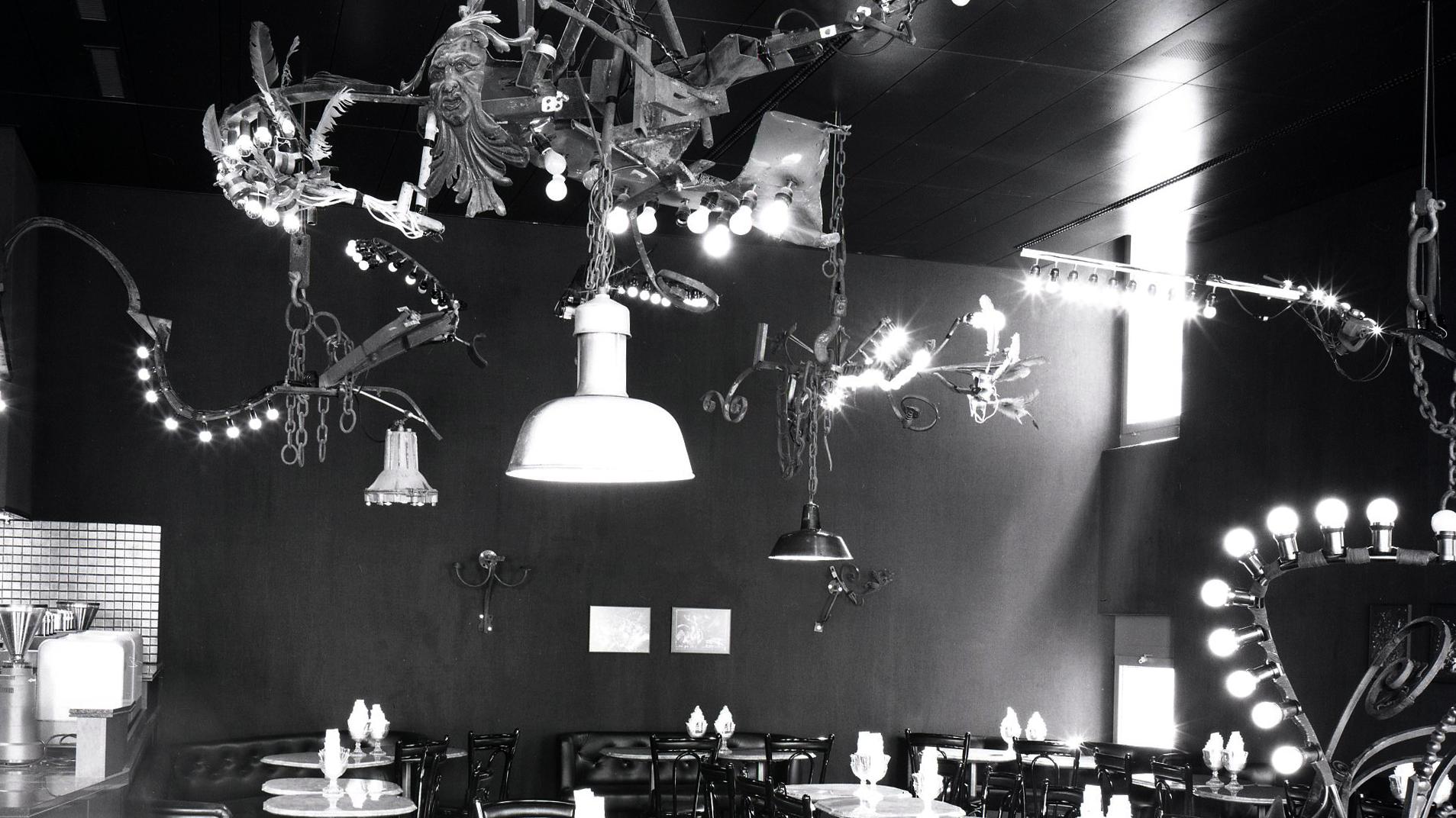 The ‘Cafeteria zur Münz’ opened its doors to the public in 1983. Apparently its visitors enjoyed the concept so much that Zurich’s cafeteria was followed by ‘Café Kyoto’ (Kyoto, Japan) in 1987 and by the bar ‘Le Tinguely’ at Hotel Palace in Lausanne in 1991. Unfortunately, both the café in Kyoto and the bar in Lausanne were closed after several years. But the good news is: some of the artworks previously displayed there can now be seen at the Museum Tinguely. The eleven lamps of the ‘Cafeteria zur Münz’ remained in Zurich’s city centre until the cafeteria’s closure in 2003. Thereafter they became a part of the Julius Baer Art Collection and were on display in an office building.

New time, venue and audience
In keeping with Tinguely’s motto “The only stable thing is movement – everywhere and always,” four of the eleven lamps have now made their way back into the heart of Zurich. Sixteen years after the cafeteria closed down, the artworks have moved into a fitting new venue close to their original exhibition space: the Atelier Bar. The Julius Baer Art Collection collaborated closely with the Museum Tinguely to restore the artworks and transport them safely into their new, temporary location.

“Many people don’t know Jean Tinguely. Hopefully his artworks appeal to them so that they develop the thought: “I should visit the Tinguely Museum sometime to see his entire oeuvre!”, hopes Seppi Imhof. His successor Jean-Marc Gaillard adds: “Tinguely is a good gateway drug into art, because his works offer something that everyone can relate to. No matter where you are on this planet, whatever the cultural group, Tinguely always causes astonishment and awakens the child in you. Everyone I met so far had to admit that they had to laugh. It’s nonsense actually, but still extremely good.”